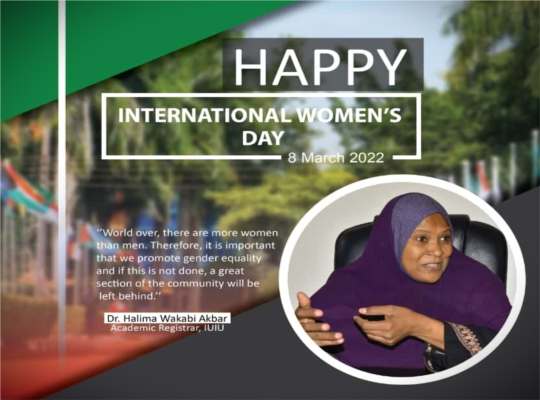 The Academic Registrar of Islamic University Uganda, Dr. Halima Wakabi Akbar, has urged girls to excel in their academics to stay relevant in society. Dr. Halima made this statement during the Women's Day celebrations jointly organized by the IUIU Students Union (IUSU), under His Excellence Kakande Hafdwar, with Hamdan Girls High School on the 08th March 2022 at Hamdan Girls High School Mbale.

The Academic Registrar, who also doubles as the Patron IUIU Women Affairs League (WAL), graced the event as the Guest of Honour. In her speech, Dr. Halima urged students always to have confidence in themselves, use opportunities that come their way, work hard, focus, and have discipline.

"If you don't have confidence, many opportunities will run away from you," she echoed.
Besides that, Dr. Halima praised the Head Teacher of Hamdan Girls High School, Mr. Ssenyonga Musa, and His Excellence Mr. Kakande Hafdwar for organizing the ceremony and supporting the girl child. She urged other men to join hands to help the girl child for a better future.

"I don't stand on the platform of feminism because I know that men and women are complementary beings, so we are not talking about women empowerment without men but rather with their help," she remarked.
Meanwhile Mr. Ssenyonga advised the girls to take care of themselves because they are significant people in society.
"A girl child is like milk; it has many nutrients, and it is loved by many, but it just takes a pinch of salt for the milk to go bad," the head teacher warned.

On the plight of orphan girl students, the Guild President, H.E. Kakande Hafdwar, advised them to work hard as long as they had someone who is supporting them.
"They say losing your parents means losing everything but losing a parent is not the end of you; the world has opportunities for us. I lost my mother after birth, and my father passed on when I was in my primary five, but I never gave up," the President sorrowfully shared his experience.

His Excellence also talked about the power of women, saying that they are very instrumental in society. "There is no country that will develop when it stifles the position of women." He concluded. The ceremony held at Hamdan Girls High School attracted other schools, including Mbale Secondary School, Nkoma Secondary School, and Nakaloke Islamic Centre.
Among the activities during the celebrations include a band procession within Hamdan, speeches, mimes, poetry, acting, and modelling.