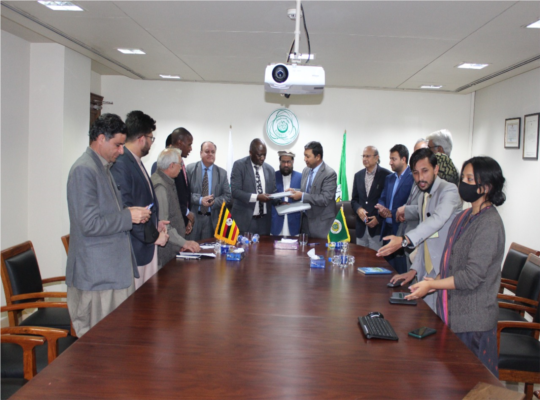 IUIU TO SERVE AS OIC’s REGIONAL CENTER OF EXCELLENCE FOR SCIENCE, TECHNOLOGY, AND INNOVATION (STI) IN AFRICA

The new OIC Secretary General, His Excellency Ambassador Hissein Brahim Taha has recently tasked COMSTECH (the Ministerial Standing Committee on Science and Technology) to prioritize Africa and work with OIC institutions like IUIU in building capacity in Science, Technology, and Innovation (STI). The aim is to transform the economies of the African OIC member states. COMSTECH has taken this charge seriously.
Â
On Friday 18th February 2022, at the COMSTECH headquarters in Islamabad, Pakistan, Prof. Dr. Iqbal Chaudhary, the Coordinator General COMSTECH, and his invited guest, Assoc. Prof. Dr. Ismail Simbwa Gyagenda, Rector, IUIU penned a historic MoU that brings OIC’s vast scientific resources to Africa. Prof. Gyagenda has been added to the membership of COMSTECH’s Steering Committee.Â

In the MoU, IUIU is to serve as a center for STI in Africa. COMSTECH will link IUIU with OIC Universities and Scientific Institutions, Industries, and Innovators. IUIU scientists and those from the regional African Institutions will receive specialized training in critical STI fields. COMSTECH will mobilize special scientists to conduct physical or virtual specialized workshops, seminars, and webinars at IUIU, targeting African scientists.Â

COMSTECH AND IUIU are set to kick-start these trainings in June 2022, with a HALAL Certification and Accreditation Workshop. Halal specialists from the world re-known Pakistan National Accreditation Council (PNAC) and other Agencies will be at IUIU to train scientists and Halal regulators/inspectors from Uganda and the region on modern methods and protocols in the field. In July, IUIU will host a COMSTECH workshop on medical clinical trials, conducted by top Medical researchers from OIC member states.Â

At a dinner hosted by Prof. Iqbal in honor of the IUIU Rector, Rectors and Leaders from premier Pakistan Universities including National University of Science and Technology (NUST), COMSAT, Punjab University, Islamic University of Islamabad, pledged their support COMSTECH’s agenda to strengthen IUIU as a Center of Excellence for the advancement of STI in Africa. The Rector, accompanied by his PA Abdallah Mutyaba visited NUST, where the Vice Chancellor, Lt Gen. Bukhari pledged to assist IUIU with postgraduate scholarships in key STI areas. They also visited COMCAST University, and the Rector Prof. Muhammad T. Afzal warmly welcomed them and pledged to work with IUIU in STI research and innovation.Â

Earlier in the week, Prof. Gyagenda was in Lahore, as a guest of the Chairman, Board of Trustees of the University of Lahore (UOL), Prof. Awais Raoof, who doubles as the Consular for Uganda in Pakistan (Lahore holds a special place in IUIU’s history because, in February 1974, Lahore hosted the 2nd OIC Heads of State Summit that resolved to develop African Muslim capacity by establishing 2 Islamic Universities for Francophone and Anglophone Africa).Â
Prof. Awais and the UOL Board have been instrumental in the establishment of IUIU’s Habib Medical School in 2014. They assisted with award-winning Biological Sciences Laboratory equipment for the School.Â Â

The Rector visited the UOL Teaching Hospital and other Faculties and Departments. Prof.Â Awais and Prof. Gyagenda agreed on focused engagement between the two Institutions so that IUIU consolidates its research and innovation portfolio. UOL committed to providing post-graduate scholarships for IUIU staff in targeted areas and COMSTECH will assist this collaboration by providing logistical support for the awardees.Â Â

As a way forward, the Rector will assign IUIU senior staff as the key coordinators for the COMSTECH and UOL portfolios, with key performance indicators (KPIs) on implementation of the above collaborations.Â
Â