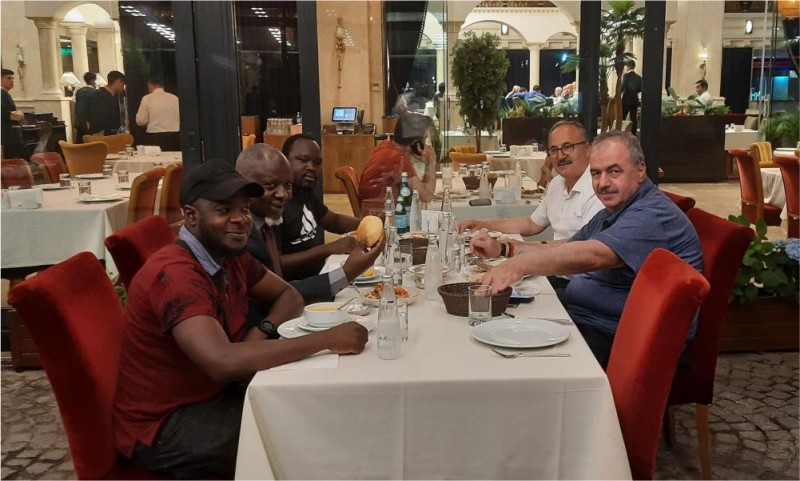 The Secretary General of the SMIIC, Dr. Ihsan Ovut hosted the Rector of IUIU, Prof. Ismail Simbwa Gyagenda at an informal dinner in Istanbul

Present were Ugandan student Mr. Mubarak Yusuf, pursuing a Masters Degree on Public Administration and Mr. Suudi Kyeyune a young Ugandan Businessman.
Prof. Gyagenda thanked Dr. Ovut for taking the time to seek him out in downtown Istanbul and hosting him for dinner.
He also thanked the Secretary General for SMIIC's co-sponsoring (with COMSTECH) of the  forthcoming International Halal Testing and Certification Workshop to be hosted at IUIU in late August this year, insha'Allah.
The Halal Workshop, a Capacity Building project of COMSTECH, the Ministerial Standing Committee on Science and Technological Cooperation of OIC member states, will attract Scientists, policy makers, and Stakeholders in the Halal industry. SMIIC will provide the technical Expertise who will facilitate the Workshop.
IUIU will host the event and coordinate with the Uganda's National Bureau of Standards to ensure the practical part of the training is accomplished.
Dr. Ihsan Ovut, welcomed the Rector to Istanbul and expressed his total support for the Capacity Building of African human resources in this increasingly critical area of healthy food.
The concept of Halal is becoming more complicated because of the current food  processing and preservation techniques that may make Halal food forbidden due to inaccessible products that are added to the food for storage and preservation.
For example, a Halal food like apples becomes harmful ( forbidden) if forbidden products are smeared on the apples for  transportation and preservation.
Both leaders, on Tuesday last week signed an MoA for the workshop. The  signing on Zoom was witnessed by the Coordinator General of COMSTECH, Prof. Dr. Iqbal Chaudhary.