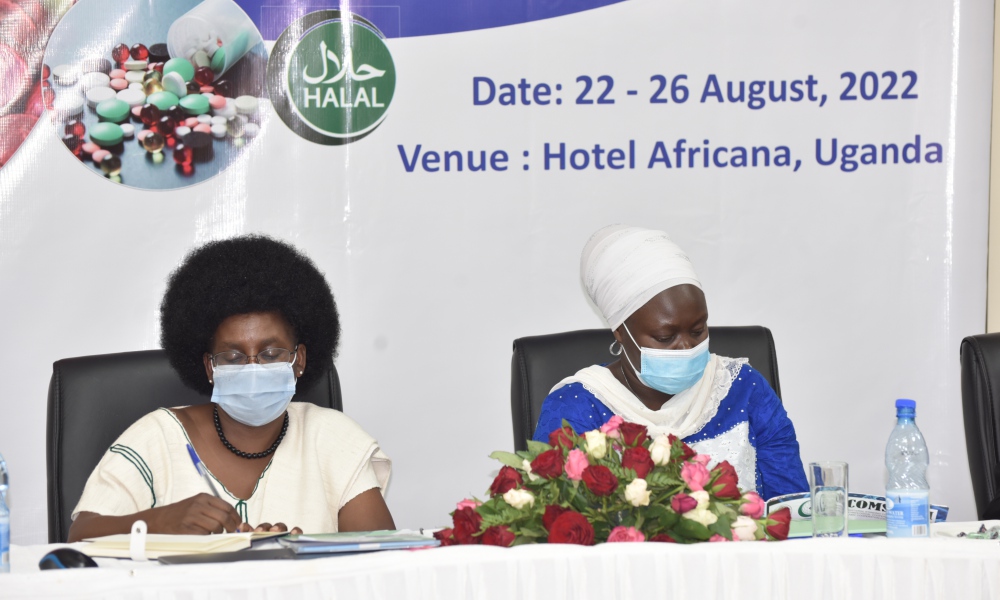 In his speech, the 2nd Deputy Mufti, His Eminence Sheikh Muhammad Ali Waiswa highlighted the historical background of the Halal concept noting that it was introduced at the advent of Islam in Uganda during the reign of Kabaka Mutesa I following his conversion to Islam before the British colonization. He explained that the concept was meant to help the natives to adopt an ideal Islamic way of slaughtering animals for human consumption. He noted that Halal slaughter was further institutionalized during the colonial and post-colonial era, which saw Muslims given the mandate to slaughter animals for public consumption to date.

While quoting the Glorious Quran chapter 2: 128, which states "Oh Mankind, eat from whatever is on Earth (that is lawful) and good and do not follow the footsteps of Satan. Indeed, he is to you a clear enemy," Sheikh Waiswa explained that the verse doesn't only stop at reminding humanity about eating good food but also states that the source must be lawful.

"The same verse warns man against following the footsteps of Satan meaning that when he partakes unclean products, they will have a negative impact on his health and character that breeds vices like corruption.  Even consuming unclean food affects prayers one offers in the worship of God,” Sheikh Waiswa remarked. He informed the participants that Uganda Muslim Supreme Council (UMSC) has taken wide strides to promote the Halal concept because it covers all basics of humans. He called for closer cooperation between UMSC and development partners in OIC member countries in terms of providing more expertise, certification, and establishment of laboratories for testing and safeguarding halal standards.

Prof. Ismail Simbwa Gyagenda, the Rector of the Islamic University in Uganda and one of the convenors of the workshop explained that IUIU being an Anglophone university, commits to training African nations in Halal concept in its totality in order to tap foreign exchange from exports to Muslim Countries.

Mr. David Livingstone Ebiru, the Executive Director of the Uganda National Bureau of Standards (UNBS), described the workshop as a timely initiative that is capable of transforming the Ugandan economy by providing access to the World’s 2 billion Muslims.

"We need to harmonize the standards in processing and manufacturing products in compliance with Islamic values," he said.  On his part, H. E. Prof. Dr. M. Iqbal Chaudhary, Coordinator General of COMSTECH disclosed that IUIU has been designated as its Centre of Excellence in Africa and pledged to work closely with Ugandan Government and other stakeholders to improve halal standards.

E. Mr. Ihsan Övüt, the Secretary of General of SMIIC, and H. E. Ambassador Askar Mussinov, the OIC Assistant Secretary General for Science & Technology both noted that the Halal Concept is a true part of Science that it is premised on quality, professionalism, and reliable systems in order to have healthy products based on Islamic values. They noted that the Halal industry is the fastest growing industry with over US$ 1.3 trillion with a wide range of products including pharmaceuticals and cosmetics respectively.

Before officially declaring the International Workshop open, the Chief Guest, Dr. Monica Musenero Musanza, the State Minister in charge of Science, Technology, & Innovation, Office of the President, expressed her gratitude to the organizers, saying that she was thrilled with the Halal concept. She disclosed how her Ministry is committed to engaging scientists, universities, and other development partners towards industrialization, ecosystems, and commercialization that will transform communities as producers, not only as consumers. She called for closer cooperation and signing of MoUs with all the stakeholders.

"Now I have been educated about Halal concept, which is beyond slaughtering of animals, which I grew up knowing. Together with my colleague Hon. Oleru Hudah, the state minister for Defense in charge of Veteran Affairs, we pledge to present a paper to the Cabinet and I hope it will get the weight it deserves," Dr. Musenero promised. Participants are to be taken through concept papers that include Halal & Global View of the Halal Industry, introduction to Halal food, State Industry in Africa, Analytical Challenges of testing Haram ingredients, and Development of Halal standards among others.