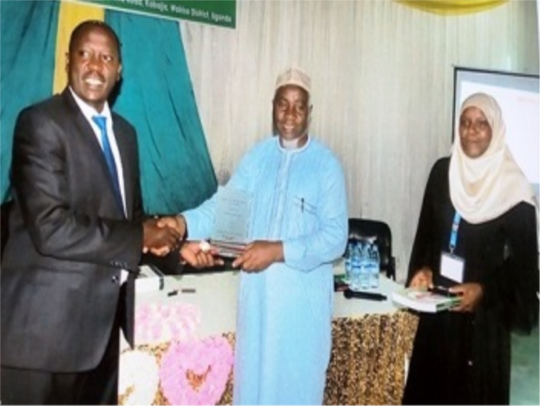 The ongoing voluntary enslavement of Ugandans in Europe and other countries is a symptom of a much bigger problem that touches on failures in the education system, politics and erosion of valuesÂ across different layers of society.

This was the blunt assessment that was delivered by Dr. Ahmed Kawesa Ssengendo, the Rector of the Islamic University in Uganda (IUIU), about the root causes of persistent under-development that characterises Uganda and majority of the African countries.

Dr. Ssengendo made the remarks while delivering a paper at the IUIU’s 1st Annual International Conference on Education, Sciences and Social Sciences that was held at the Females’ campus, Kabojja recently.

With participants from universities across Uganda, the East African region, South Africa and Nigeria, the three-day conference was held under the theme: Rebranding Research for Sustainable Development of the Local Communities in Sub-Saharan Africa.”

Dr. Ssengendo’s paper, titled: Rethinking The African University, The Need for Paradigm Shift, made a fierce reproach of the education systems across black Africa, arguing that current business-as-usual approaches are outdated and need reform in order to serve society better.

“I have seen the generational changes among our students in this country and you stop and think that perhaps things are not what they should be. There’s need for a paradigm shift in the way universities in Africa do business.”

He noted that although Africa gave the world its first university (University of Fess, in Morocco) in the 9th century, universities on the continent have done little to nurture a critical mass of innovators who can create employment and generally change the lives of ordinary people.

“Between 1859 and 1860, an estimated 15 million people were taken from Africa. Their sweat and blood is what built the Americans. But that is not the most painful part of the story. The current story is that today Africans are seeking to be enslaved in Europe. They pay a lot of money, thousands of dollars to go to clean toilets, to my mind the amount that is able to give them capital and be able to make a decent living in their countries” The Rector stated.

Dr. Ssengendo adds that: “The new tragedy of Africa is self-sought slave trade and that is extremely disturbing. And many of these are graduates of our universities, who cannot find jobs at home, who have no creativity but risk everything to try to go abroad. But we have to ask, what is causing this phenomenon.”

The agony we are enduring in Africa, which is beyond the agony we had at the time of independence, begs the question; what are our universities actually doing to reverse the situation in Africa. Unemployment levels for Sudanic Africa, are very high. Corruption and its toll on the continent is unimaginable.

He blamed this tendency first on centuries of slave trade that dislocated energetic and resourceful people to the Americas, but also attributed the mass movement of young people into Arab and other countries as a product of ‘an education system that has no soul.’

“We must find a way to integrated African values into the curricula of universities. Countries like Malaysia, strongly emphasise values in their education system, in addition to heavily and consistently investing in education.

Dr. Ssengendo offered a number of ideas as a way to make African universities more relevant to the development challenges of their communities.

First, he said, universities must be community-based institutions that serve the interests of communities.

Citing Cuba’s training of doctors and the entire health system, Ssengendo noted that student doctors spend more time in the communities interacting with the people than in classrooms.

“Cuba’s health system develops a people-based doctor not a hospital-based doctor. Mbarara University of Science and Technology (MUST) has started it, although they are not there yet,” he said.

He called for reforms in the way the National Council for Higher Education approves courses and also accredits lecturers with the view to building synergies across universities, as well as embracing the continuous learning model.

He challenged what he called an outdated model of programmes or degrees at universities.

He said: “The straight jacket requirements and yardsticks used by NCHE, are no longer realistic. We must begin engaging the National Council so that we reform it.

“What is happening in many European countries is that instead of universities admitting a student to do an under-graduate programme in Business Administration, they split it into certificate courses.

Describing corruption as vice that has eroded the enormous natural resources of the endowed African continent, Dr. Ssengendo also argued that the scourge has scarred the ambitions of most people particularly relating to protecting their wealth.

He used the presentation to call for increased investment into centres of higher learning as well as in research.

He singled out Malaysia and Pakistan to show that with political will, universities can be agents of change.

“Malaysia, for 30 consecutive years, devoted 25% of its budget to education. Now 87% of the high-tech exports in the IOC member countries comes from Malaysia. But it took serious investment and upholding of values.

And in Pakistan, between 2000 and 2008, the government appointed a Professor of Chemistry as minister for higher education. This professor convinced his colleagues that Pakistan can work to reverse the massive brain drain of its professionals.

“He said let us given universities sufficient funds, let us pay the staff a good salary. But the government said we do not have the money but he said, I have a solution for that; Let us reduce the tax rate to under 5 percent. They ended up getting a lot money.