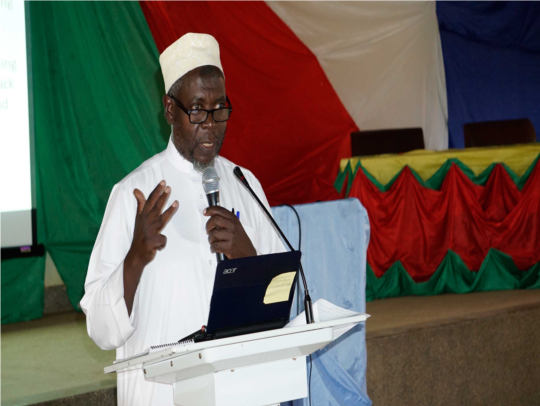 The chairperson Islamic University Da’wa Liaison and Community Outreach Department (DLCOC) has heartened Muslims to fast the first ten days of DHU’L-HIJJAH and do more of worshiping during this period so as to earn uncountable rewards from Allah.

Dhu’l-Hijjah is the twelfth and final month in the Islamic calendar. It is a very sacred month, one in which the Hajj (pilgrimage) takes place as well as the Festival of the Sacrifice.

The ten days started on Friday 2nd August and shall end on Saturday 10th.

Dr. Sulait Daud Kabali noted that even if one failed to start on the very first day, one can still join in within the days. He however accentuated that the ninth day; the day of ‘Arafat’ should not be missed.

“As the night of ‘leilatul khadir’ is the greatest of all nights during the month of Ramathan, the day of Arafat is the greatest day of ‘Dhul Hijah’ that one doesn’t have to miss fasting” he added.

Hafsah the prophet’s wife (may Allah be pleased with her) said that “Four things the prophet never neglected; Observing fast on the day of Arafat, three days of every month, and offering fajr sunnah prayers early in the morning” reported by Sahih and Muslim.

Dr. Kabali revealed that on the day of Arafah (the 9th day of Dhul-Hijjah), pilgrims make their way from Mina to a nearby hillside and plain called Arafat, where Prophet Muhammad PBUH is believed to have made his last famous sermons in his final years of life and the second day of Hajj (pilgrimage).

He further explained that fasting on this day(day of Arafa) is a great act of ‘ibadat’ especially for those who never made it for pilgrimage because it absolves ones sins for two years: the previous year and the coming year and fasting on 'Ashura, (the tenth day of Muharram) atones for the sins of previous years.

The DLCOC head also added that beside fasting on the day of Arafat, there are also other important acts of worship like Performing Dhikr and Takbeer, Standing the Night in Prayer, Making Sincere rrepentance, increase in doing ALL good deeds and Slaughtering animal(s) and distribute the meat (Sacrifice) during these fast ten days of Dhul- Hijjah.

Meanwhile all Muslims across the world are expected to celebrate Eid-ADhua on Sunday,11th August 2019. During this festive, Muslims are mandated to slaughter animals in commemoration of Prophet Ibrahim’s (may Allah be pleased with him) loyalty to Allah when he offered to sacrifice his son Ismael.