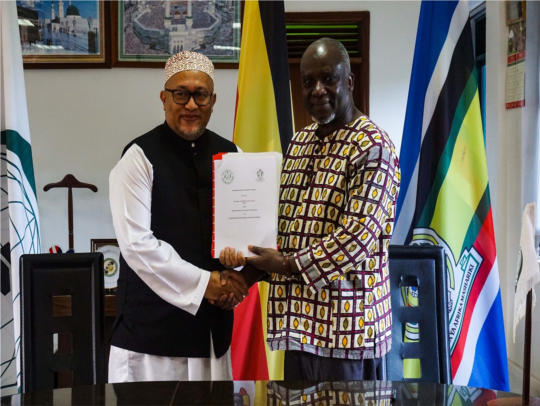 The Islamic University in Uganda has signed a memorandum of understanding with Abdul Rahman Al-summait University, Zanzibar to cooperate in various fields.

According to the Memorandum signed on 23rd August 2019 at the University’s Main Campus Mbale, the two Universities will cooperate mainly in promoting research and development in the East African Region.

The memorandum which also among others seeks to provide for the exchange of students and staff for capacity building between the two institutions was signed by the IUIU Vice-Rector in charge of Academics Prof. Ismail Simbwa Gyagenda and the Vice-Chancellor of the Zanzibar University, Professor Amran Rasli.

According to Prof. Gyagenda, IUIU is currently moving towards developing its research capacity as a way of building a better human resource not only for the institution but for Africa as a whole.

“We want to make IUIU a home of researchers, this will not only give us a better ranking among institutions globally but build our human resource who will help contribute towards finding solutions to Africa’s problems” He detailed.

The Vice-rector revealed that the collaboration with Abdul Rahman Al-summait University is one among many others that the institution intends to make with other Universities in research related fields.

Professor Amran hailed the memorandum noting that IUIU being a well-established institution, will not only create a great opportunity for them to have their lecturers trained in PhD programs but also get ideas on how to design Academic programs relevant to the youths in the Zanzibar Area.