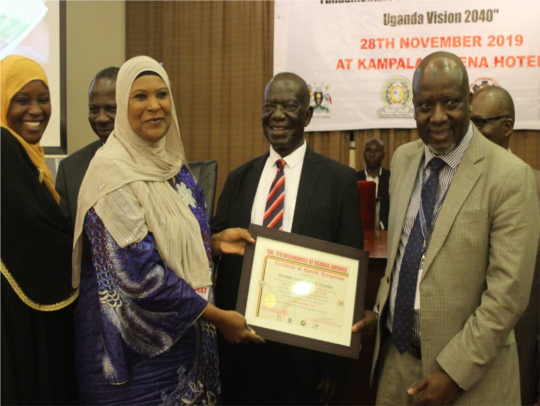 Islamic University in Uganda (IUIU) has been named the best private university of 2019 during the 7th Visionaries of Uganda Awards held on Thursday 28th November at Kampala Serena Hotel.

The Islamic Institution beat over 30 other private universities.

Visionaries of Uganda Awards was launched in 2013 by President Yoweri Kaguta Museveni with a major aim of recognising organisations/institutions and individuals who are contributing towards the realisation of Uganda Vision 2040.

Presiding over the ceremony as the Guest of honour, the Vice President H.E Edward Kiwanuka Sekandi stated that recognising and rewarding excellence encourages quality products, service and positive competition for profound socio-economic development of the nation.

“This ceremony comes at an opportune moment when local producers and service providers need to benchmark what they put on the market vis-a-vis global players,” said the Vice President.

“Besides the research by NPA, the private sector and government agencies also exhibited their work which where considered in addition to corporate social responsibility from private companies,” Mwesigwa added.

The event is conducted annually and organised by the Visionaries Advisory Board in conjunction with the National Planning Authority (NPA) which developed the Uganda Vision 2040.