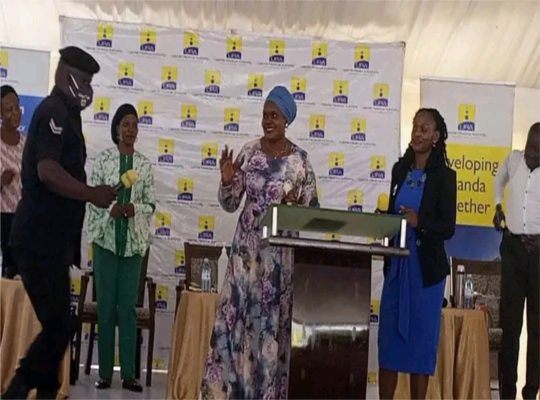 By Kamyuka Keneth
The 3rd Deputy Prime Minister of Uganda, Rt. Hon. Lukia Isanga Nakadama, the women Member of Parliament for Mayuge District and IUIU Alumna, has called the Female entrepreneurs to embrace technology using Smartphones to market their businesses.Â

She said this during the Uganda Revenue Authority (URA) annual women’s conference in which she represented the Prime Minister of Uganda, Rt. Hon. Robinah Nabbanja as the Guest of Honor at the Wash & Wills Hotel in Mbale city on Friday 18th March.Â

An IUIU Alumna, Ms. Fatuma Namutosi, a business entrepreneur, and Executive Director, Byeffe Foods, says she was forced into online business during the lockdown when movement restrictions were imposed to control the Spread of Covid-19.Â
“Many businesses closed due to failure to adapt to online marketing, but some us hit the road, and here we are, flourishing,” she bragged.

Ms. Fatuma says she used Facebook to reach her customers by placing orders and deliveries for her clients, but the high tax makes her lag behind since Facebook is now on the ban in the country. “The Closure of Facebook in Uganda has greatly affected online marketing as most of the clients are more familiar with Facebook than other social media platforms,” Fatuma cried. She added that the internet is slow, which delays online business in the country. Ms. Namutosi requested the Deputy Prime Minister to assist in bridging the communication gap by raising the matter to President regarding the ban.

The Women also raised concerns that the taxes are not benefiting the local person since the roads are in a poor state, especially in rural areas, and the hospitals still have no drugs.

Rt. Hon. Nakadama responded by informing the women that government shall ensure that the drug supplies in Government Health Facilities are sufficient. She further said that the government has put checks to counter some health workers who hide drugs away from patients.
Besides that, Patience Rubagumya, the Commissioner of Legal Services and Board of Affairs, noted that Women ought to embrace the new technologies to cope with the changing world of technology to improve their businesses.

Under the theme: “Technology a driving factor for business facilitation and growth,” the conference aimed at educating women about the relevance of technology in publicizing and promoting their business and selling their products and services online. Besides that, the conference also seeks to create a good relationship between the business communities and get people’s views that can help improve the URA by enhancing revenue collection.