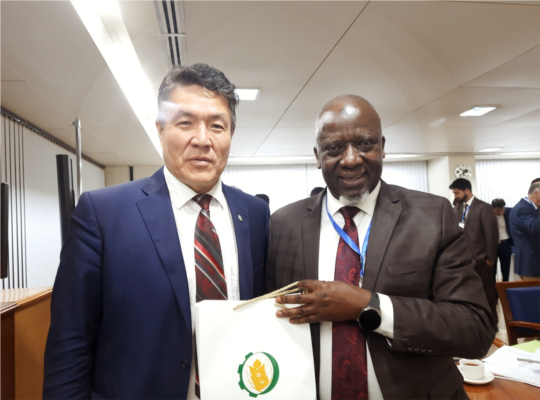 The Rector, Prof. Ismail Simbwa Gyagenda is at the Headquarters of COMSTECH in Islamabad, Pakistan; attending the 5th Steering Committee Meeting for the Implementation of the OIC STI Agenda 2026.
The meeting which was hosted by COMSTECH, attracted 34 experts from other OIC institutions including ISDB, SESRIC, ICESCO, Islamic Organization for Food Security (IOFS), Islamic Academy of Sciences (IAS), Islamic University of Technology (IUT), Bangladesh.

One of the items on the agenda was a focus on Africa and Islamic University in Uganda (IUIU) will be the Center for STI Capacity Building in Anglophone Africa.
Among several others, the Rector met with the OIC Assistant Secretary General of Science and Technology, Ambassador Askar Mussinov who was the Chief Guest.

IUIU will be hosting webinars, seminars, workshops etc in several STI areas with scientists from sister Universities as the target participants.
IUIU is scheduled to host a Public Health Seminar in June 2022 and a Halal Testing and Certification Workshop, etc.; in July 2022.