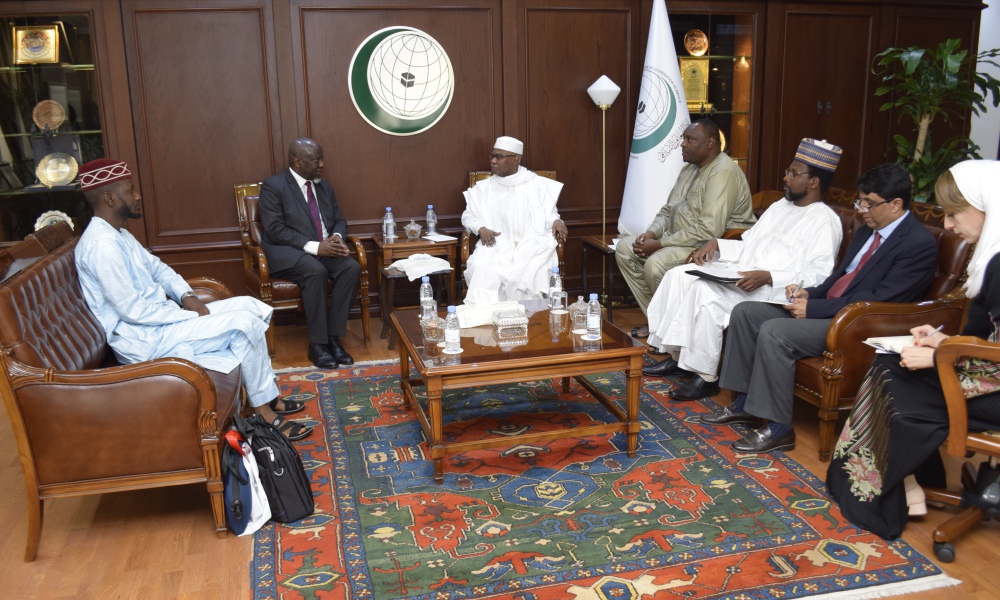 Meeting With The Secretary General of the Organisation of Islamic Cooperation (OIC), His Excellency Ambassador Hissein Brahim Taha

The Rector conveyed greetings from the IUIU Management, staff, and students and thanked HE, the Secretary General for the tremendous support he and the Secretariat have rendered to IUIU.
He especially thanked the SG for OIC's current pivot to Africa. As a result, IUIU has now been designated as the STI hub for Africa and IUIU's Rector is now a member on the Steering Committee of COMSTECH.
IUIU has indeed started hosting international seminars, symposia and workshops on STI themes.
The first one was the recent International Halal Workshop co-sponsored with COMSTECH and SMIIC, which was very successful and was opened by the Uganda Minister for STI-Office of the President, Hon. Monica Musenero Masanza.
The Rector thanked HE the Secretary General for His Excellency's letter of support for IUIU's bid to host an Internationally accredited Halal Testing Laboratory, which will help the nation and the region to access the global Halal Market of 1.5 trillion dollars. The Government of Uganda is also interested as this will support its promotion of the export sector.
The Rector also informed the SG about IUIU'S recent scoop of the Consumer Choice Award for 2022, which indicates the national reputation of the University. IUIU graduates are sought after due to their skills and discipline.
Regarding the general status of IUIU, the Rector informed the SG that the University has slowly but surely overcome the worst effects of Covid-19, which had paralyzed the University operations.
The future plans are to establish an Endowment (Waqf) arm to diversify the sources of revenue and reduce the over-dependence on student tuition and fees.
The Rector also updated the SG on the current projects supported by the Islamic Development Bank (IsDB), and thanked the Bank for its stalwart support for IUIU. The upcoming Nsambya Waqf Project ia particularly significant as it will be IUIU's second Endowment weaning IUIU from over-dependence on tuition.
The Rector also thanked the Government of Uganda, under the wise leadership of HE President Yoweri Kaguta Museveni, for the tremendous support he has extended to IUIU from its inception in 1988. The Rector informed the SG that the Ugandan Government has donated 218 acres of oand at the Main Campus, and premium land in the capital: on Kampala Road where the King Fahad Plaza, endowment is located plus 7 and 1/2 acres where IsDB has agreed to finance another Endowment.
Thr Government of the Royal Kingdom of Saudi Arabia, has also supported IUIU for many year as well as other Governments, especially Kuwait, UAE, Nigera, Turkiye, Egypt, Malaysia and Libya.
The Secretary General thanked the Rector for the positive report and praised IUIU for innovatively surviving the COVID-19 effects. He assured IUIU of his continued support, and said wherever he goes he advocates for IUIU's support.
He expressed his sincere thanks to the Government of Uganda and the leadership of President Museveni for his Pan-Africanism and his support for IUIU as a University for both Muslims, but also serving non Muslims.
HE also thanked IsDB for their critical support and promised to convey his thanks to HE the President of the Bank.
The SG also thanked the Government of Turkiye for their commitment to develop IUIU's farmland into a Demonstration Farm and an income generating venture.
The SG pointed out that education and skilling are the only route for empowerment of youth, as this would prevent them from dangerous pursuits including extremist groups.
He thanked the Rector for the IUIU plans for the new Faculty of Agribusiness & Natural Resources Sciences to teach Agribusiness using the RUFORUM model and produce agricultural entrepreneurs rather than agricultural officers.
Attending the meeting were the Secretary General's Science and Technology Advisor, Dr. Abdallah Bakhit Saleh, the Director General of OIC, Mr. Irfan Shaukat, and Ms. Ghaida Salameh, Officer in the Science and Technology section of OIC.